OkenoIl y a 11 mois
Welcome to another review!
So I got the figma swimsuit bodies, Goodsmile’s second attempt at what they have now dubbed the "figma styles" line (see here) but what I had equated to the figma more line (like Nendoroid more). Since I reviewed both versions of the figma bride and groom, I thought I’d review them. Like my reviews of the original figma Bride and Groom and the recent “Noir” versions, I will focus on the figures by themselves first and then the headswapping compatibility and comparisons to the figma bride and groom releases since they share the same "character" (Emily and Ryo).

Overall impression tl;dr: I was very impressed! Being a mass market release makes the prices much more reasonable for what you get. Although both are a little small in the height department, the proportions of both the male and female body are improved and not as skinny as the bride and groom (particularly noticeable with the hand pieces), meaning more headswaps look okay on them both.

If ever there is proof of the days of jam-packed 3000 to 4000 yen figma being a thing of the past, these are it. Surprisingly, the figma male (Ryo) was more expensive than the female (Emily). Possibly due to more plastic in the trunk design? Or because they made fewer because the male ones sell less (see aftermarket bride vs groom prices).

All they each come with are eight hands and standard figma stand and bag. There are no extra faces or accessories. The boxes are very compact at least (even smaller than the recently reduced new "standard" figma box). I didn't bother taking a pic of the box yet.

The male version sculpt has nice abs and well defined but still anime style chest. Arms, chest and legs are noticeably thicker than the grooms. As I will show later, it makes headswapping a little more flexible than with the figma groom

The swimsuit is a baggy style that covers up the top of the leg. The whole thing would be super easy to mask and paint (I think the lower legs may even be removable if heated but I haven't experimented yet).

The girl version is wearing a simple black bikini. The bust is a modest size, which is certainly my preference as it fits with the overall proportions of the arms and legs (although I’m sure some would like an “oppai” version, and I understand v2 will have a larger bust).

The bottom is a typical figma underwear style all in one so it’s easy to do a custom paint job with that. What I really liked was the design of the legs. There’s some really tight integration of the leg mold such that you will have very few gaps around the crotch when posing either at the hips or waist. It was really quite surprising compare to the “cast off” figma bride where gaps show up all the time when posing.

The top is a typical top tied at the back of the bust and wrap around the neck. The straps from the neck to the breast had a little paint going off the molding. It’s more complex to mask if you want to do a good job painting due to the armpit area (I've been struggling to do it, and my first attempted failed and I need to redo).

The one area to be aware of on the mold is the bow on the back. It’s slightly bendable but not particularly soft. Be careful how you hold the upper body to swap heads. I can predict it being broken off on head swapping if you aren’t careful. On the plus side, as I was working on repainting one of my copies, I found out by accident that the bow is a separate piece with a small tab glued in. So if you are gentle you can remove it without damage, paint it, and glue it back in (which is what I am going to do).

The head design is a bit of a disappointment. The female identical to the bride but without the flowers on the head, which is obviously nice for a generic version. The male version is identical.

The female figma can sit down easily. No surprises really. All the standard figma female joints with the bonus of nothing blocking posing. Like a figma archetype but with sharper 2.0 era sculpting in an anime style.

However, there’s no sliding chest/waist joint and no sliding shoulder joints that many female figmas are coming with. It’s not a major negative since there’s no clothing or large bust to get in the way of posing but I always liked figmas that had it.

Like the girl version, having no clothes reduces encumbrances. Although there are no sliding shoulders there is a sliding waist joint to help the figure sit down on a chair for example.

However, there is an added benefit to having the sliding waist joint. Due to the design, when the waist joint is slid down, there is no unsightly gap. This lets you adjust the standing height of the figma and it can perceptively make a difference with the effectiveness of head swapping.

Anyway it comes with jointed toes and all the other standard figma joint designs. The thickness of the trunks may limit some poses, but overall it is good. I certainly prefer trunks over a speedo for male swimsuits.

In the end, I’m not 100% sure but I feel like it is closer to the first bride release. Rather pale. But perfectly fine with almost any figma female since there is so little variation in female skin tone for figmas.

Fortunately, the skin tone of the male swimsuit is clearly darker than the original figma groom (which was unnaturally pale and made headswaps terribly difficult) and pretty much the same as the noir version skin tone.

So here’s the interesting thing I discovered about the figma swimsuit figures. Although each swimsuit figma is about the same height as the figma bride/groom respectively, and the heads are identical, the swimsuit bodies overall has thicker proportions. Thicker arms, legs, etc. Well toned and looks nice.

But what surprised me the most is the hands are bigger too. I had thought the bride/groom hands were small, but when you put them side-by-side, they are noticeably different. As a result, the swimsuit hands are much closer to a standard figma hand instead of the tiny ones the bride and grooms have.

Headswapping Samples
I'm just going to intersperse some samples with my comments on headswapping capabilities. The comments won't always be relevant to the pics.

For my primary purposes (figma Rin and Shirou), the skintones and proportions are perfect.

As I mentioned earlier, the change in proportions and sliding waist joint on the male makes for a little more potential for headswaps. The male figma is still the tougher one to find great matches due to the variety of male figma skintones, but still possible.

If you're adventurous/skilled, the male figma design in particular (with the removeable trunks) makes repainting extremely easy, including the body if you want to change the skintone.

A not-so-obvious benefit of the standard male figma design (with easily removeable "pants" due to the waist piece + legs basically equaling a pair of pants) is that it is very easy to make a "shirtless" version of any headswapped figma by putting a different waist and legs on the swimsuit body, which opens up different possibilities!

Sadly, the standard skirted female design (which is jointed differently) doesn't allow for the same potentials.

Overall, I am satisfied with both figmas. The price is relatively reasonable (in current market conditions) for what you get, which makes buying multiples for customization much cheaper. The change in proportions is great, and finally allows for some more believable headswaps. I believe the male figma will be very easy to mask and spray-paint for more variety. The female figma is proving difficult to mask and paint, but I haven't given up.

I would definitely recommend them if you have female (and possibly some male) figmas that you want to have a "swimsuit" version ready for.

Should you buy them for just the figmas alone? I.e. are they nice figmas by themselves? Well, obviously if you like Ryo/Emily (who are almost Asuna/Kirito in design), sure. But that's not why I think most people will be getting them.

Penguiniey
Okeno • Il y a 10 mois • #70277914Good question! I tried it yesterday, and sctually, sort of yes.
Link looks pretty normal now. Zelda still looks a little bobble-head. Not as bad as the bride. But she needs wider shoulders (and maybe a bigger chest?) given how broad-shouldered her figma is.
Here's a pic: 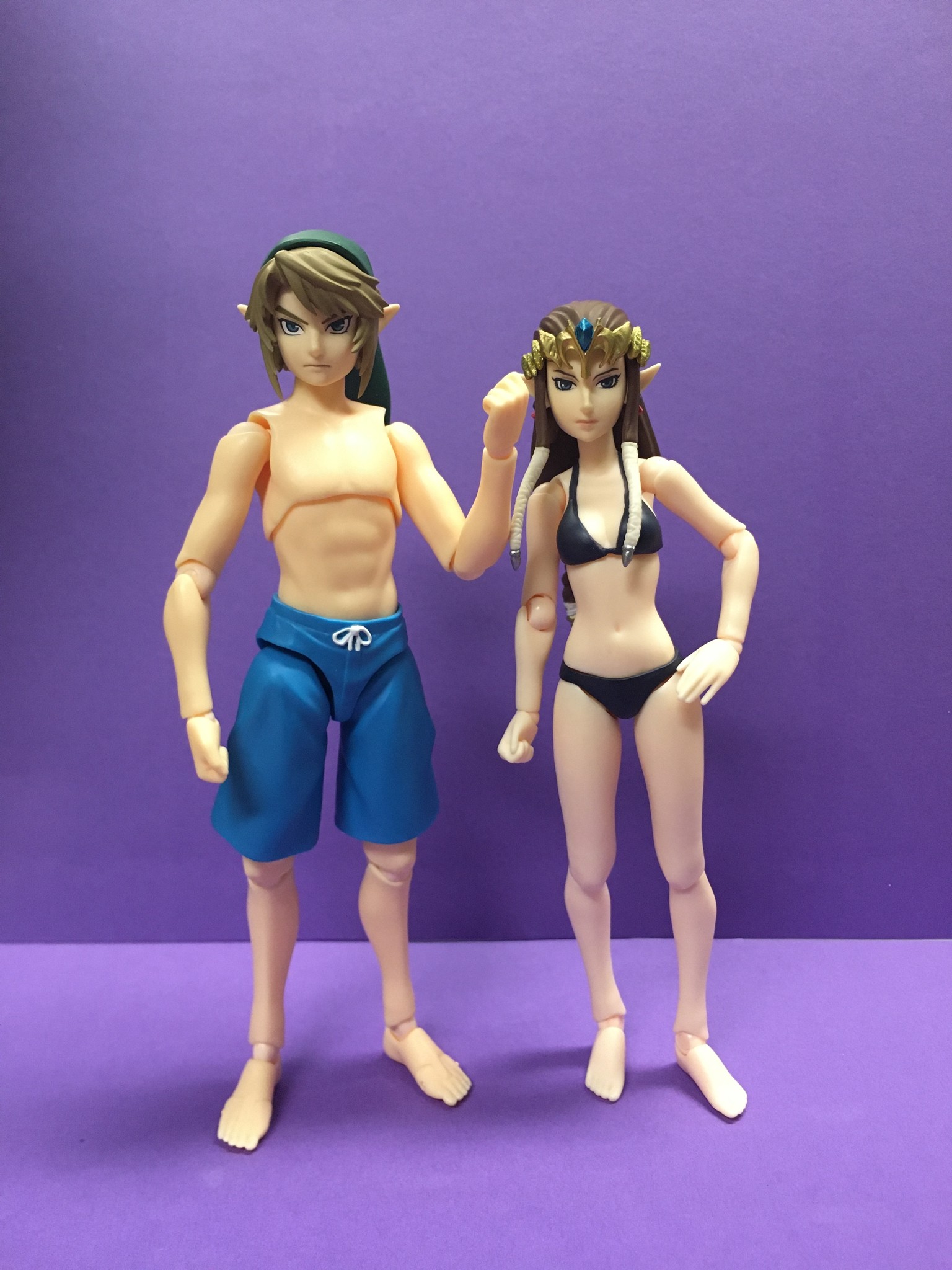 Yeah Link looks a lot better, although I agree Zelda's still got a bit of the bobble head, it may be the character's height as well as the shoulders. I've been trying to get more figures whose bodies will fit the Zelda figure I have since the default body has no articulation due to the dress.

So far I only have Motoko Kusanagi (the movie version) from Ghost in a Shell: 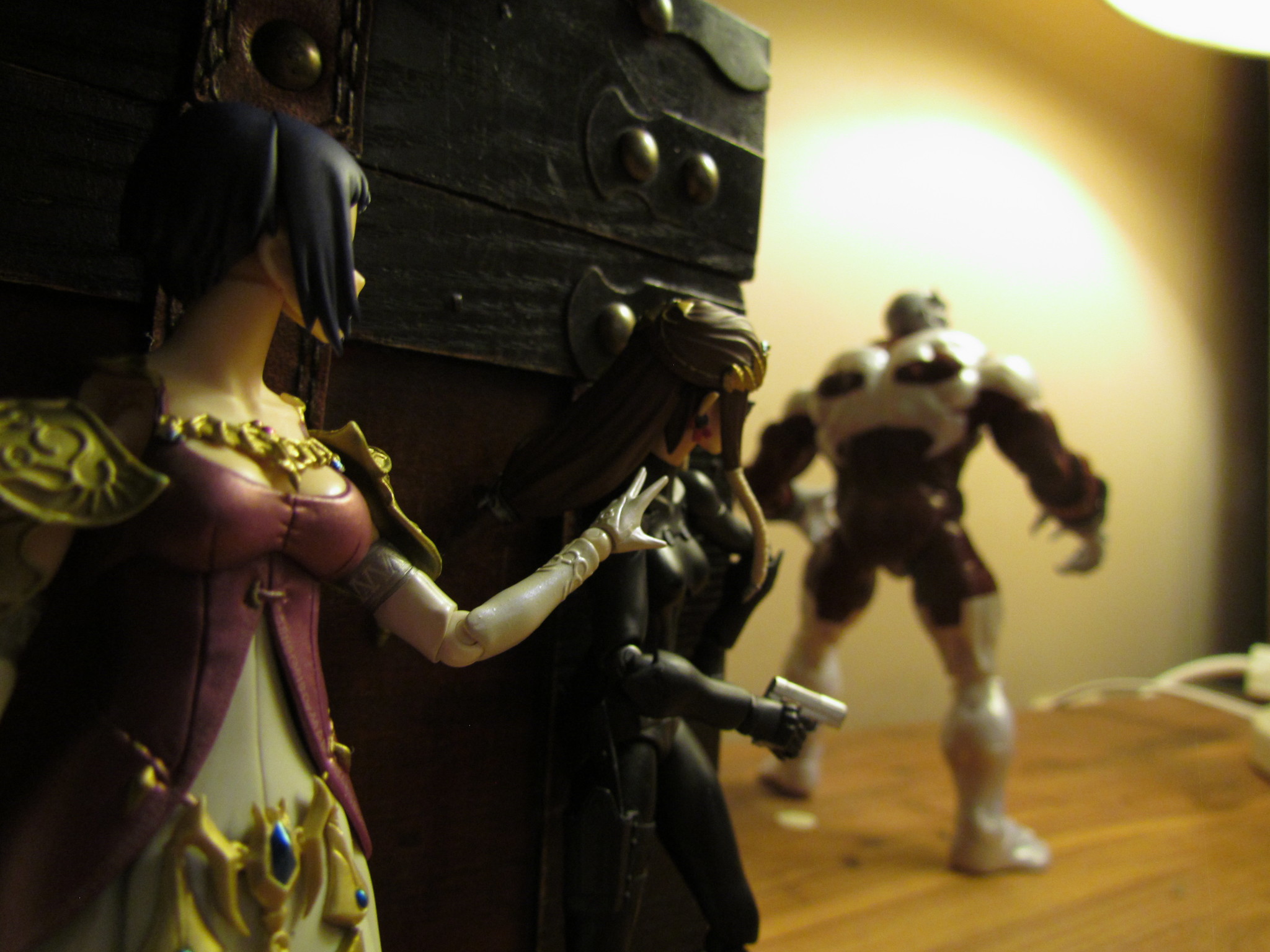 Okeno
Penguiniey • Il y a 10 mois • #70211467Does the Zelda figma headswap a little better onto this one due to the thicker proportions?
Good question! I tried it yesterday, and sctually, sort of yes.

Link looks pretty normal now. Zelda still looks a little bobble-head. Not as bad as the bride. But she needs wider shoulders (and maybe a bigger chest?) given how broad-shouldered her figma is.

Penguiniey
Does the Zelda figma headswap a little better onto this one due to the thicker proportions?
Il y a 10 mois

Welcome to my blog! I will likely post mostly about any customizing efforts and maybe the occasional review to the extent real life doesn't get in the way.